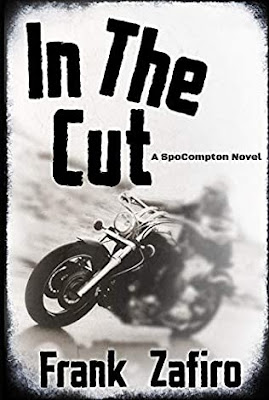 Synopsis/blurb...
Boone has been prospecting with the Iron Brotherhood outlaw motorcycle gang for almost a year, trying to earn his patch with the club. When a simple muscle job goes terribly wrong, his world changes forever.
He is quickly plunged deeper into a world of drug and intimidation, and the lines between right and wrong blur. The bonds of brotherhood that he forges with other members clash with the dark actions they take. His girlfriend, Faith, represents a danger of another kind, but Boone can't stop himself where she is concerned, either.
When someone close to him dies, and rampant rumors of a rat in the clubhouse puts everyone in danger, Boone comes to learn what it really means to live his life in the cut.
In The Cut is the second in author Frank Zafiro's Spo-Compton series after At Their Own Game and it's another book I enjoyed just as much as the first. Here we have a different main character with Boone taking centre stage. Jake Stankovic, the main focus from the earlier book has a minor walk-on part here.
Bikers, a gang, prospects, criminal enterprise, strong-arm tactics, tests, violence, and an unforeseen outcome with massive life-altering consequences, and secrets - big secrets!
A lot of the characters in the book have them .... Boone, Tall Ed - a member of the biker gang, Faith - Boone's sort of maybe girlfriend and a kind of biker groupie though possessed of a little more self worth than some of the hangers on and Jerry, Boone's old friend and confidant.
I liked keeping company with the main character. On the surface he has strong alliances. He has a best friend, A.C. and they share a close bond. This friendship is continually tested throughout the book, as Boone sometimes takes issues with A.C.'s behaviour and actions while carrying out tasks for the gang. He is making progress in his relationship with Faith. They have a strong attraction and connection to each other. And he has the loyalty of the Iron Brotherhood, though like many organisations that operate as a business/work environment, there are rivalries, tensions and levels of distrust and mutual animosity. The consequences of transgressions here though aren't an office meeting, a warning and a note in his personnel file. Valka, Jericho and Smiley - the Brotherhood's hierarchy - are a little more direct keeping discipline in the ranks.
Boone spends a lot of time in his own head. Thinking, planning, speculating. He's conflicted and torn - forward or back, one gang or another, the girl and their future, keep his secrets or trust in someone and unburden himself. It might have been simpler if he was Catholic and had the easier option of the confessional. Boone is forever trying to emulate his late brother, a cop who walked a different path to him. He ends up in an unenviable situation with limited options for manouever. He's in a box with the walls closing in on him.
The outcome when it comes has a certain symmetry to it. It's not pretty but it's credible and in keeping with all that has come before. Fair to say things don't end well for all of our participants.