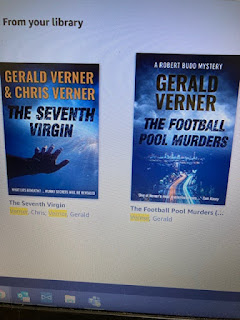 I think I was attracted to The Football Pools Murder because of the title. Years ago I can recall my mum and dad playing the pools every week and also joining in with a syndicate myself when I started work. I can dimly remember checking my dad's coupon against the results at a Saturday tea-time.

I can't remember why/when exactly I got the other book, but going from the co-authoring name and the release date, I'm guessing a family member found an uncompleted manuscript after the author had passed.

‘One of Verner’s most mysterious cases…’ – Tom Kasey

Gerald Verner (1897-1980) was the pseudonym of British writer John Robert Stuart Pringle. Born in London, Verner wrote more than 120 novels that have been translated in over 35 languages, and many of his books have been adapted into films, radio serials and stage plays. Verner also wrote forty-four Sexton Blake tales. 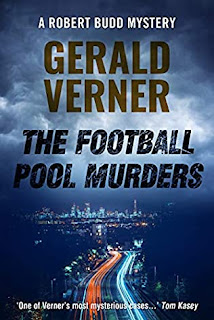 Winning a fortune can be a losing gamble...

Most people would regard winning a fortune on the Football Pools a stroke of very good luck indeed.

Such a win offers up opportunities many people can only dream of. But for three particular people their big win was anything but lucky.

After receiving their presentation cheques from the Pools company, the three winners went missing — disappearing mysteriously, their cheques uncashed.

Were these murders the work of a religious maniac who violently disapproved of gambling?

Was it a clever ploy to exact revenge of some kind?

Was it simply a poorly thought attempt to get hands on the money?

Superintendent Budd has good cause to wonder as he tackles one of his most baffling cases ... 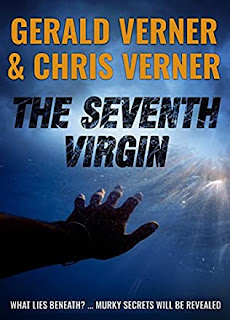 1950s London: when Constable Joe Bentley of the Thames River Police rescues what he thinks is a naked woman from the freezing waters of the River Thames, nothing is what it seems.

For the woman turns out to be an exquisitely modelled tailor's dummy... stuffed with thousands of pounds' worth of banknotes.

Later, that same morning, the dead body of a man is found further downriver.

Superintendent Budd of Scotland Yard, under pressure to prevent millions of counterfeit notes from entering general circulation, is certain there's a connection that links these incidents.

But in order to prove his hunch, Budd needs hard facts. And hard facts are only found by unearthing firm evidence.

Aided by brave WPC Glenda Lane, his investigation leads him and his colleagues to endure one of the most dangerous and longest days of their lives...