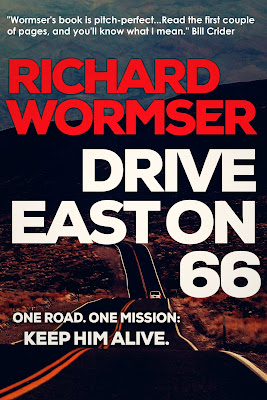 Cop Andy Bastian is offered a thousand dollars in exchange for a favour – not an insignificant amount in the early Sixties.

He’s to deliver Ralph, the brilliant son of wealthy parents, to Kansas to be detained in a mental health facility.

It’s a long journey from California, but they don’t get far before it’s clear they’re being followed.

Initially suspecting the boy’s father is merely keeping a close eye, it quickly becomes clear that something much more sinister is afoot.

Just who is trying to get to them?

And can he get Ralph safely to the asylum before they do?

Richard Wormser is not an author I had heard of until very recently with Endeavour Press re-issuing some of his novels from the early 60s. Drive East on 66 is the first of two books featuring Andy Bastian.

Bastian is a cop and has the opportunity to earn a few extra dollars, moonlighting as a delivery driver for a rich businessman, Sidney Bartlett. The cargo is the businessman's son, Ralph who needs to be delivered to an asylum, without fuss and avoiding any publicity. Our book is a road trip. Travelling with Bastian and Ralph is Olga Beaumont, a graduate student in psychology. Olga has been helping with Ralph at Bartlett's mansion.

Andy, with his cop spider sense soon gets the feeling that they are being followed. A mechanical breakdown with Bartlett's nearly new Cadillac enhancing that suspicion. Investigating further he soon dismisses the likely pursuers as too dim to be up to no good. Subsequent incidents occur on our trip which positively confirm that persons unknown do not want Ralph to reach his intended destination.

I quite enjoyed this one. We have the three main characters in the vehicle and its interesting seeing how the relationships between them all evolve during the course of our eventful road trip. Ralph's moods and mental well-being fluctuate wildly on our trip. Little stresses rapidly changing his personality from likeable, friendly, funny and great company to irrational and unpredictable. Bastian works well with Olga in recognising when he is about to mood-change and in heading off most of the possible explosions. Not always though.

Ralph outwits Bastian and Miss Beaumont on one occasion, leading to police involvement after an incident that leaves a young adult in hospital. Bastian has to use his skills and authority to divert police attention away from his young charge. An Indian reservation cop and the girl's father is not so easily put off. His reappearance later in the book adds to the tension.

Enjoyable without setting my reading world alight. I warmed to our trio as the novel progressed and was happy enough with the plot and the subsequent conclusion and rationale. I'd be happy reading more from Wormser in future. 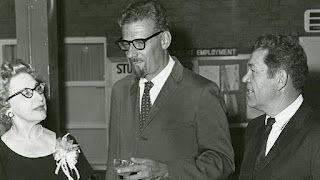 Richard Wormser had 14 books published between 1934 and 1972, some under a pseudonym Ed Friend. He wrote Westerns as well as crime/mystery fiction. He died in 1977.

The University of Arizona has more info about him - here.