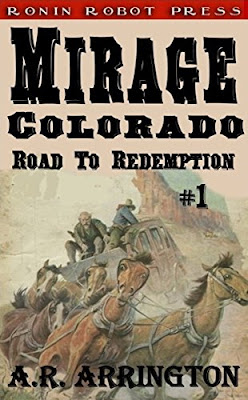 
HOW CAN YOU MAKE AMENDS WHEN YOU DON'T EVEN KNOW WHAT YOU'VE DONE?

Moss Partridge has just a very rude awakening. The last he remembers, it was 1864 and he was a paroled Union soldier stopping off in Denver on his way home to his wife and child in Montana. Now it's a dozen years later, he's the town drunk in Mirage, Colorado and he has no memory of those 'lost years.' Something sure must have happened because there are people trying to kill him and two Indian children who are following him everywhere he goes and, apparently, deciding whether he should live or die.

"Mirage, Colorado" is just the first installment in A. R. Arrington's brilliant new series: "Road to Redemption." Follow Moss Partridge as he treks across the length and breadth of the Wild West, meets living legends like Wild Bill Hickok and Colonel John Chivington, and takes part in historic events from gold strikes to gunfights.

A very different "Western," these books will follow one man's journey in search of his home, his history, and his soul.

An interesting departure for me – an 80-odd page long western enjoyed in audio-book format. Our narrator, Alex Zonn has a voice like gravel, one particularly apt to narrating the story of Moss Partridge.

Partridge has “woken” from 12 years of being the town drunk with no recollection of any of them. His road to recovering his memories and possible redemption, seems bound to a pair of sibling Indian children. Moss interacts with the pair - the brother more hostile and far less tolerant than his sister in his judgement of Moss.

Moss gets sober, repaying some trust shown in him by a sceptical townie and sets out to return to his family. Along the way we have a couple of adventures, firstly assisting on a stagecoach ride which is attacked by a gang of hold-up merchants and secondly working on a cattle drive. Partridge’s behaviour and actions, show him as a man of character, quite selfless in his actions.

Each step of the way he’s dogged by these two young Indians, watching, judging and intervening, as Partridge’s behaviour passes muster in their eyes. Our man seems to be atoning for as yet unrevealed sins of the past.

This first episode in Partridge’s return to his past was an intriguing listen, enhanced greatly by the narration. I’m interested in following on with more of these in the future, either in this format or via the written word.

Author detail is scarce, but Ronin Robot Press have been publishing some of his output. There’s a brief author biography on their website….. Author A.R. Arrington, a former rodeo rider, longtime rodeo clown, and Special Forces operative; has decided to turn to Westerns and his high-octane prose is like nothing you've ever read before.

Terry Irving head honcho at Ronin Robot Press and author of the previously enjoyed Courier offered free audio access to this Arrington book. Thanks!
Posted by col2910 at 09:09