PETER LEONARD - VOICES OF THE DEAD 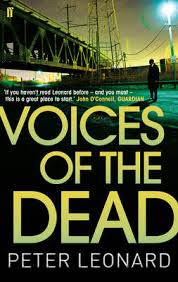 Peter Leonard has already begun to establish himself as a distinctive, must-have voice in suspense fiction. Now he delivers his most compelling, most jaw-dropping novel yet, introducing us to a character you're not likely to forget anytime soon.

The year is 1971. The place is Detroit. Harry Levin, a scrap metal dealer and Holocaust survivor, has just learned that his daughter was killed in a car accident. Travelling to Washington, DC to claim the body, he learns that the accident was caused by a German diplomat who was driving drunk. This is only the beginning of the horror for Harry, though, as he discovers that the diplomat will never face charges - he has already been released and granted immunity. Enraged and aggrieved, Harry discovers the identity of his daughter's killer, follows him to Munich, and hunts him down. What Harry finds out about the diplomat and his plans will explode his life and the lives of everyone around him.

Brimming with action and dark humour, Voices of the Dead, firmly positions Peter Leonard as a writer ever suspense fan needs to read.

After recently lapping up the excellent sequel to this one, Back From The Dead a couple of months ago I was offered the opportunity to travel back in time and see where scrap-metal dealer and holocaust survivor, Harry Levin first crossed swords with Third Reich Nazi executioner, Ernst Hess.

Voices Of The Dead didn’t disappoint. It’s fast-paced and addictive. Levin’s a likeable protagonist, with a funky, freaky and unlikely sidekick, Cordell Sims. Sims is young, black and in-between jobs; still deciding what sector of the career criminal ladder to aim for, after a failed stint as a heroin dealer and a dishonourable discharge from the US army. A great double act is borne when fate has them collide with each other and some young Nazi skinheads in a Munich bar.

Harry Levin is in Munich to track down Hess, a German diplomat responsible for the death of his daughter, Sara. Hess is another Holocaust survivor, but from the dark side of the tracks. Hess is intelligent, capable, cunning and successful. He’s a ruthless operator with a penchant for survival and dark secrets that he feels no remorse for.

Our calculating Nazi sets his sights on tidying up some loose ends, with some extreme housekeeping, while Harry Levin tries to achieve some measure of justice for his daughter and Hess’s other victims, by taking him down. Inevitably they collide at the climax of the book.

Leonard effortlessly blends this heady mix of characters in an explosive cocktail. I don’t know if a writing style is hereditary, but Peter the son, exercises the same level of economy with his words as his late father, Elmore. 2014 has introduced me to some fantastic new writers; John Florio, Terry Shames, Leif G.W. Persson to mention a few – Peter Leonard is the latest addition to my list of favourites.

I do have some of his earlier books on the shelf to get to, Quiver (2008), Trust Me (2009), All He Saw Was The Girl (2011). Next year sees a new book published – Eyes Closed Tight. By then I hope to have relaxed the loose embargo on adding books to my collection.

This short series would definitely benefit from being read in order, and my enjoyment was slightly tempered by kind of knowing how things would pan out – but for that I’ll blame myself.

My review of Back From The Dead is here.

Thanks to Lou at The Story Plant for my copy of this.