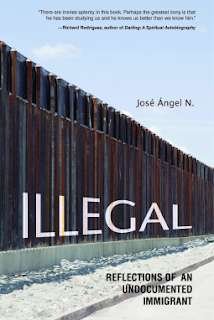 A day after José Ángel N. first crossed the U.S. border from Mexico, he was caught and then released onto the streets of Tijuana. Undeterred, N. crawled back through a tunnel to San Diego, where he entered the United States forever. Illegal: Reflections of an Undocumented Immigrant is his timely and compelling memoir of building a new life in America. Authorial anonymity is required to protect this life.

Arriving in the 1990s with a ninth grade education, N. traveled to Chicago where he found access to ESL classes and GED classes. He eventually attended college and graduate school and became a professional translator.

Despite having a well-paying job, N. was isolated by a lack of official legal documentation. Travel concerns made big promotions out of reach. Vacation time was spent hiding at home, pretending that he was on a long-planned trip. The simple act of purchasing his girlfriend a beer at a Cubs baseball game caused embarrassment and shame when N. couldn't produce a valid ID. A frustrating contradiction, N. lived in a luxury high-rise condo but couldn't fully live the American dream. He did, however, find solace in the one gift America gave him–-his education.

Ultimately, N.’s is the story of the triumph of education over adversity. In Illegal he debunks the stereotype that undocumented immigrants are freeloaders without access to education or opportunity for advancement. With bravery and honesty, N. details the constraints, deceptions, and humiliations that characterize alien life "amid the shadows."

José Ángel N. is an undocumented immigrant. He lives and works in Chicago.

Trying to get back on track with my non-fiction reading, which I try and use to educate myself on current affairs/politics my curiosity was aroused by this recent addition on Net Galley.

As a UK resident, I’m not totally ignorant of the effects of immigration on this small island I live on. It can be an emotive subject, often stirred up by newspapers with a slant leaning towards the right. The recent rise of the English Defence League and its origins in my old hometown of Luton, where my mum still lives concerns me, but so does the rise of extremism in any form anywhere.

Immigration in the US, though I don’t follow political debate there that closely, is no doubt another hot topic, particularly around election times.  Candidates can promise to do things pre-election to secure the Hispanic vote and then fail to implement the promise when in office, Mr Obama.

I don’t have any answers myself, but I’m not in public office. I can sympathise with the author’s plight as a “non-person”, particularly in the efforts he has made to improve himself over the years through education. He pays taxes, he contributes to society, but he has been criminalised.

How much of America’s development and improvement over the past hundred years or so, can be attributed to the positive benefits of immigration? Why is immigration perceived as a threat and a drain?

An interesting fact that I was unaware of............apparently Obama’s administration has been responsible for a far higher number of deportations than the previous Republican regime. (I didn’t make a note of any figures that may have been given.)
Perhaps, I shouldn’t be surprised by this, considering this liberal President feels it is appropriate to joke about drone strikes.  Strikes which kill hundreds of innocents, including children, in addition to removing enemies of the state.