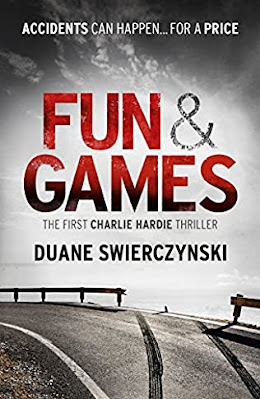 NUMBER OF ACCIDENTAL DEATHS PER YEAR
By suffocation: 3,300
By poisoning: 8,600

STAGED BY PROFESSIONALS: You have no idea.

Ex-cop Charlie Hardie's latest job is guarding an isolated mansion in LA's Hollywood Hills. But it comes with an unwanted guest - a D-list actress who says she's being hunted by professional hitmen.

The killers are real.
They've tracked her to the house.
And they're not letting anyone out alive.

The first in a trilogy starring Charlie Hardie. Fast, frenetic, funny, plenty of action, likeable main characters, likeable supporting characters, slight stretch of the imagination to "buy" the plot - but isn't all fiction just made up words? Fantastic interplay between Hardie and Mann, the main adversary.

I read it in just over a day, which would have been quicker if life hadn't interfered.
The most enjoyable of his books to date, having previously read Secret Dead Men, The Blonde, The Wheelman and Severance Package.

I'll keep an eye out for the series follow-ons as this was a real blast.

Bought new last year from somewhere or other, Buzzard Books in town maybe.
Posted by col2910 at 21:17