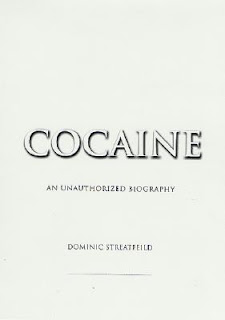 The story of cocaine isn’t just about crime and profit; it’s about psychoanalysis, about empire building, about exploitation, emancipation, and, ultimately, about power. To tell the story of the twentieth century without reference to this drug and its contribution is to miss a vital and fascinating strand of social history. Streatfeild examines the story of cocaine from its first medical uses to the worldwide chaos it causes today. His research takes him from the arcane reaches of the British Library to the isolation cells of America’s most secure prisons; from the crackhouses of New York to the jungles of Bolivia and Colombia.


Having read and thoroughly enjoyed Streatfeild’s latest book A History Of The World Since 9/11, I did a bit of web browsing and bought his two earlier books; Brainwash - A Secret History Of Mind Control and Cocaine.


Brainwash was summarily read and whilst interesting didn’t rock me in the same way as 9/11 did. Cocaine, when it arrived in hardback the size of a house brick was started then put away.


With a steely resolve to finish this after Christmas, I got back into it.


Streatfeild has undertaken a mammoth amount of research both into the origins of the drug its initial rise and fall in the late 19th century when Freud and others became aware of some of its abilities, and its resurgence in the late 70’s up to 2000. (This book was published back in 2003, so doesn’t cover the last 10 years of the continuing saga.)


I found the early part of the evolution of cocaine instructive, but ultimately a lot less interesting than the last 30-odd years of the 20th century.  Cocaine’s resurgence into US cities in the 70’s and 80’s and the reaction from the Reagan and subsequent administrations, I found a lot more relevant.


Streatfeild has interviews with LA crack-king, Ricky Ross and Colombian cartel members, along with various DEA agents and lowly growers in the South American jungles. He provides sharp analysis of the ongoing “war on drugs” waged by the US administration. A war that is ultimately unwinnable, unless there is a radical change of strategy and some forward thinking.


Political suicide for any politician to countenance, but is legalisation a better route to travel? I wouldn’t necessarily advocate it, but it would be worth having a reasoned, non-hysterical debate in regards to it. Remove the profit potential from the equation. For the traffickers and dealers then it becomes a less lucrative market to get involved in. Spend some of the money currently used to combat the trade in assistance for the small growers in South America, providing alternative crops with sustainable value in the market place. Reduce spending on housing over 500,000 people in the prison population, the result of tougher laws which have criminalised lower level street dealers and users, and put the money to better use.  Okay - a bit simplistic, but is it a worse alternative to the current status quo?


It won’t happen though. Too much money to be made from prolonging the fight, too many corrupt officials, both in law enforcement and government in Mexico and South America for anyone to want to try an alternative method of combating an issue that isn’t going away anytime soon.


The book may be 10 years old and a bit behind the current situation, but Streatfeild has opened my eyes to this phoney war. Educational, instructive, thought provoking.