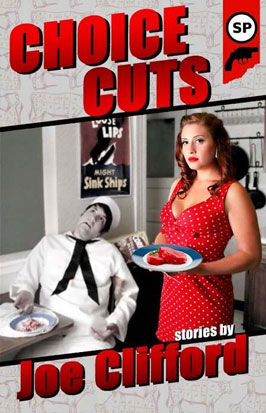 Clifford’s debut short story collection Choice Cuts mines the fractured territory of the marginalized, misanthropic, and short-changed. From morally bereft television producers desperate for a hit, to veterans suffering psychotic splits, Clifford delves into the madness and desperation that plague those living on the edge, while never surrendering the search for the light that guides us all. In these fast-paced, hard-hitting tales of ne’er-do-wells, addicts, and gangsters, two predominant themes emerge throughout the collection: human life frequently reduced to little more than pieces of meat, and the bad choices we often make to escape that fate, however good our intentions.

Echoing the pulp past of Thompson and Keene, with the sardonic worldview of Caulfield and Durden, Clifford’s style is lean, mean, and unforgiving.

Joe Clifford is the producer of Lip Service West, a “gritty, real, raw” reading series in Oakland, CA. His work has appeared in Big Bridge, the Bryant Review, the Connecticut Review, Drunken Boat, Fringe, Opium, and Word Riot, among others. Joe’s writing can be found at www.joeclifford.com. His novel Wake the Undertaker will be out later in the year.


I can’t claim to be the world’s biggest fan of the short story. I usually find it hard to care about what happens to the victim/villain/hero/protagonist (delete where applicable,) that I’ve only known for a few short pages. It’s hard to empathise or more bluntly give a shit, after only a short journey.
I’ve struggled through collections by William Boyd, James Kelman and Jack Kerouac in the past, fervently wishing to be struck by lightning just to make the pain stop.


Conversely, a recently read ensemble from Dan Fante - Corksucker did hit the mark.
This collection has more than a few gems in it. Clifford serves up 16 of his stories in Choice Cuts and whilst not all of them smacked me in the face like a slammed door there were enough of them here that did.


4 from 5
I purchased this earlier this month for kindle on Amazon UK, despite my New Year resolution to curb my book buying – but hey, no regrets!