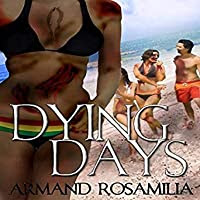 Synopsis/blurb ...
Sunny Florida, beautiful beaches, no traffic on A1A...
Zombies roaming the dunes in search of the living.... Darlene Bobich is in a fight to survive, find food, safety, and ammo for her Desert Eagle before its too late. Dying Days are upon us. The Undead roam the Earth...searching for the living...to eat...to feast...to rip apart...Extreme violence... Extreme sexual situations...Extreme Undead...
Continuing the Darlene Bobich story begun in Darlene Bobich: Zombie Killer...and soon to be an independent film!
I fancied a bit of a change from my usual reading and decided to mix things up with a shortish Audible listen and a Zombie Apolocalypse offering from Armand Rosamilia. I've read and enjoyed Rosamilia before and he didn't let me down this time.
We have some fast-fiction, akin to a fast-food meal. Not especially memorable but able to satisfy a particular craving at the time.
Zombies; a non-zombie, female main character who has endured loss and sexual assault and who is surviving the new world reality the best she can. To say, Darlene Bobich's life is a bit of a struggle is an understatement ..... hunger, wanderlust, a permanent search for sustenance and shelter, temporary alliances with other non-infected survivors, some temporary comfort, repeated attacks from both Zombies and non-Zombies, death, violence, blood, and several helpings of sex.
I didn't realise at the time that this is the second tale in Darlene's ongoing struggle, after Darlene Bobich Zombie Killer (a title I have subsequently listened to and enjoyed), but I don't think it makes a big difference in the scheme of things. The world continued to spin on its axis despite me reading the first couple of these episodes out of sequence. There's nine or ten in all, but despite my enjoyment I doubt I'll have the stomach to last the distance. I think events and happenings are going to become a bit repetitive after a while. 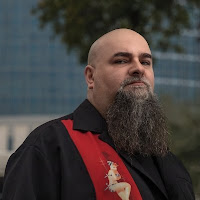 Rosamilia did make me chuckle though. Who knew that some Zombies could have sexual appetites and hard-ons?
Fast, exciting, gory and bloody in a lot of places. Probably one to be avoided if you are of a sensitive disposition, or if you don't vibe thrills with horror that demand a suspension of disbelief.
3 from 5
Read - (listened to) November, 2021
Published - 2012
Page count - 82 (2 hrs 27 mins)
Source - Audible purchase
Format - Audible
Posted by col2910 at 05:29