A couple this week from another new-to-me author, Craig Holden. 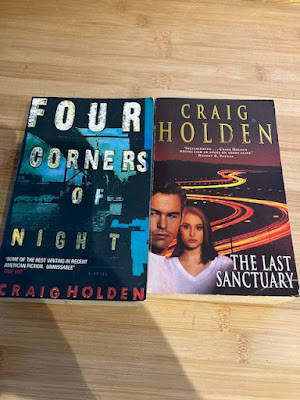 Craig Holden had six books published between 1994 and 2007, but nothing since. I wonder why. 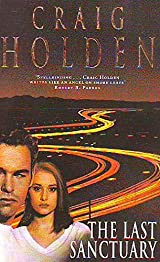 SEVEN DAYS AND A LIFETIME AGO, JOE CURTIS WAS HITCHHIKING ALONG A ROAD IN AMERICA'S HEARTLAND WHEN A YOUNG COUPLE STOPPED TO OFFER HIM A RIDE. JOE HESITATED A MOMENT. THEN, IN A SINGLE, LIFE ALTERING ACT, HE CLIMBED IN. WITHIN HOURS, HE WAS A MAN CAUGHT IN A NIGHTMARE. AND WITHIN DAYS HE WAS WANTED FOR MURDER...

From the author of The River Sorrow, hailed by the New York Times as 'a haunting, highly original thriller' comes a harrowing portrayal of an innocent man accused of murder, plunged into America's dark underworld of armed militias and terrorist cults, running from cops, federal agents - and his own tortured soul.

Joe Curtis is twenty-five, a Gulf War veteran with a survival instinct honed to a razor's edge. On the road to rescue his trouble brother, Joe is burned-out and nearly broke when a chance encounter changes his life - for the worse. And forever. Agent Leanne Red Feather, a Native American in a department full of tough white men believes that Curtis will lead her to a cache of stolen arms, and to charismatic cult leader Father Amon. A man preparing his acolytes for Armageddon.

So begins a chase across America that ends in The Last Sanctuary - a place as universal as our own worst nightmares. It's 9.00 on a Sunday morning in a city deep in America's midwest. Bank Arbaugh and Mack Steiner have just come off the night shift. Sitting in a cafe waiting for breakfast, they get a call over the radio: a teenage girl is missing. With a glance, the two cops - friends since childhood and close as brothers - know that their lives have shifted off balance. Seven years before, Bank's own daughter disappeared and has never been found.

'A book that adds a human dimension to crime writing and is all the more harrowing for it.' The Guardian

'Craig Holden's Four Corners of  Night brings new life to familiar grooves and has the hallmarks of a modern classic.' Time Out