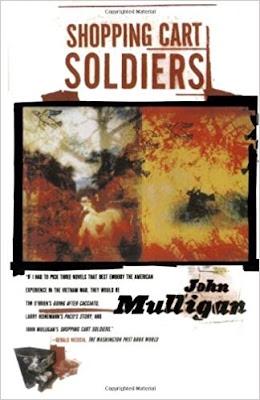 Shopping Cart Soldiers is a modern day Odyssean tale of the atrocities of war and its even more appalling aftermath. Set against the brutal realities of the conflict in Vietnam, John Mulligan tells the story of Finn MacDonald, an eighteen-year-old boy who is drafted soon after he emigrates with his family from Scotland. Upon returning from Vietnam, Finn is plagued by the terrible memories of all he has seen and is pushed into a haze of self-destructive behavior that tests his will to survive. Shopping Cart Soldiers chronicles Finn's painful and remarkable journey -- and his triumphant path to spiritual renewal and recovery.

"As dreamy and eerie, singular and compelling a novel as you will ever read. A prime piece of storytelling." - Larry Heinemann, author of Paco's Story

After 20 years on the TBR pile  - I bought this new back in the day, we have a bit of a Marmite book. I've seen reviews for it oscillate between 1 star and 5 stars, sadly I'm one of the readers less enamoured with this one.

Most of our action is in Finn MacDonald's head and his dealing with, scrub that failing to deal with the return to America after his time in Vietnam. Very obviously suffering from PTSD and haunted by events from his year at war, he drowns himself in alcohol and lives the life of a vagrant, pushing a shopping trolley around San Francisco, having effectively resigned from his role as a husband, father and son.

I guessed early on that this was going to be a difficult read and so it proved. Most of the action takes place inside our main character's head ...... ghosts of former comrades, enemies, a Nazarene (Jesus?), Robert Louis Stevenson and the good and bad sides of his personality - his id maybe ......try to simultaneously keep him down and out, or endeavour to help him come to terms with his past, forgive himself, forgive others, give up the demon drink and try to become a functioning human again. A lot of our thoughts also concern Alba, the Gaelic name for Scotland and our main character and author's homeland and a desire to return there and be at peace.

I don't know much about the author's own personal story. He hailed from Scotland originally. I believe he served in Vietnam and had issues on his return to the "World" and I guess this was semi-autobiographical in places maybe and helpful as a form of therapy for him in writing this, but I couldn't connect personally. Not quite like swimming through treacle, but not a book that flowed for me. (A bit of subsequent Googling - tells me the author died in 2005 after being struck by a car.
SF Gate obituary is here.) 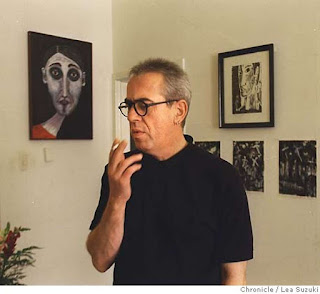 Hopefully it helped him, hopefully others enjoyed it - Larry Heinemann, author of two of the best books I've ever read about the Vietnam experience - Close Quarters and Paco's Story - seemed to like it.

It did nothing for me, even the outcome where our main character reconciles - mainly with himself - left me feeling indifferent.