A couple this week from Northern Irish author Steve Cavanagh. Cavanagh is yet another author that I have stock-piled on the TBR mountain but haven't gotten around to reading yet. 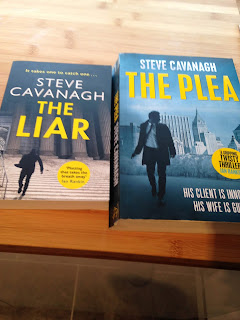 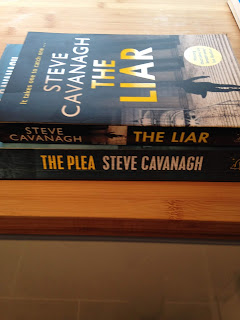 Most of his output so far concerns one recurring character - Eddie Flynn, though there's a recently released standalone novel, Twisted and a collaboration with Mark Dawson, Scorpion also available.

The Plea is the second full length Flynn novel and was preceded by The Defence and a shorter introductory novella - The Cross. The Liar is the third in the series.

I do like a legal mystery though don't read enough of them in all honesty. Struggling to remember the last one. Maybe Cavanagh will get me back on track. 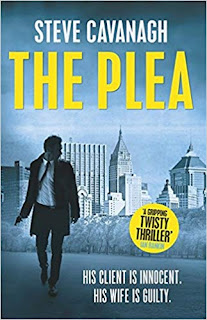 Eddie Flynn earned his law degree in the school of hard knocks. Now this con-artist-turned-criminal defense attorney is about to take on his toughest case yet.

Billionaire David Child swears he didn't murder his girlfriend, Clara - even if the evidence suggests otherwise. Home security video showed no intrusion. The murder weapon was in David's own car. He seems guilty as charged. So why won't he plead guilty?

Meanwhile, the FBI needs David's help in taking down a huge money laundering scheme. Now it's up to David's lawyer, Eddie, to get him to take a plea bargain. Otherwise the FBI will use incriminating files on Eddie's wife to send her to jail. Still, David insists that he didn't murder anyone. . .

As the FBI pressures Eddie to secure the guilty plea, Eddie becomes increasingly convinced that David is telling the truth. With adversaries threatening, Eddie has to find a way to prove David's innocence and find out if there's any way he might have been framed. But the stakes are high: Eddie's wife is in danger. And not just from the FBI...

"If you're a fan of John Grisham... you will be a fan of Steve Cavanagh." - Nelson DeMille, #1 New York Times bestselling author 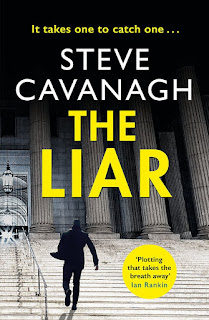 A missing girl. A desperate father. A case which will tear them apart. Leonard Howell's worst nightmare has come true: his daughter Caroline has been kidnapped. He can't rely on the cops, so Howell calls the only man he trusts to get her back. Eddie Flynn knows what it's like to lose a daughter and vows to bring Caroline home safe. Once a con artist, now a hotshot criminal attorney, Flynn is no stranger to the shady New York underworld. However, as he steps back into his old life, Flynn realizes that the rules of the game have changed - and that he is being played. But who is pulling the strings? And is anyone in this twisted case telling the truth...?