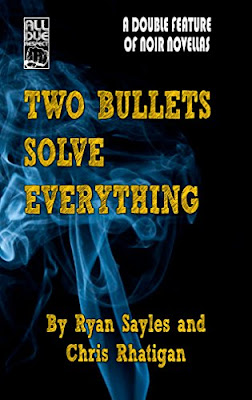 In Disco Rumble Fish, author Ryan Sayles rewinds to the 1970s, when Buckner rolled with the city's SWAT team. Tasked with finding a criminal associated with a mobster's violent jailbreak, Buckner and company prove there's nowhere to hide when you kill one of their own.

In Chris Rhatigan's A Pack of Lies, newspaper reporter Lionel Kaspar is out to find the truth and advocate for social justice. Just kidding. He's a scam artist of the lowest order out to make a quick buck off of whoever crosses his path. But the comfortable niche he's created for himself is about to be crushed.

A two-fer here from All Due Respect, both from new-to-me authors.

Disco Rumble Fish from Ryan Sayles......a cop tale, camaraderie, banter, a tight team, macho brotherhood, disrespect for authority, looking after their own, 70s setting and a far from PC environment, cutting corners and beating up suspects in custody, while everyone else kind of looks the other way.

Fast-paced, humorous, plenty of action, a decent ending - what's not to like?

A Pack of Lies by Chris Rhatigan..... a reporter's tale. Lionel Kaspar and his final demise. From early doors, you feel like you're in Jim Thompson territory and a witness to the slow inexorable decline of a once decent reporter and (maybe decent) man. Kaspar in present day is shaking people down to bury stories and fund his gambling and drinking habits. The regional paper he reports for is in decline as is his career. Another shakedown fails and a hatchet job story follows. He's in the firing line with his newspaper after the intended victim with deep pockets sues the paper. More importantly a story he buried regarding the high school coach and a 13 year old pupil, in return for a monkey a month has just broken. Desperation time for Kaspar, better have another drink and some action on baseball, before covering his tracks.

Doomed and desperate, with a certain inevitability about the outcome. Just my cup of tea.

I'd be hard-pushed to choose a favourite between these two, so I'll call it a tie. Both were concise and to the point, while at the same time offering enough flesh on the bones of our main participants. I wasn't page counting or wishing I was reading something else while reading these. Attention holders for certain.


I have more from both these authors on the pile, so I'll hopefully enjoy more from these two in 2018

2 BY RYAN SAYLES
2 BY CHRIS RHATIGAN