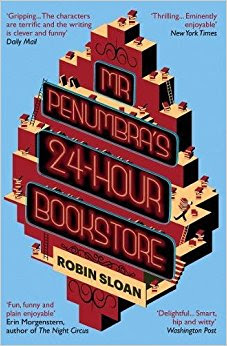 A New York Times bestseller, Mr Penumbra's 24-hour Bookstore is an entirely charming and lovable first novel of mysterious books and dusty bookshops; it is a witty and delightful love-letter to both the old book world and the new.

Recession has shuffled Clay Jannon out of his life as a San Francisco Web-design drone - and serendipity, coupled with sheer curiosity, has landed him a new job working the night shift at Mr. Penumbra's 24-Hour Bookstore. But after just a few days, Clay begins to realize that this store is even more curious than the name suggests. There are only a few customers, but they come in repeatedly and never seem to actually buy anything, instead they simply borrow impossibly obscure volumes from strange corners of the store, all according to some elaborate, long-standing arrangement with the gnomic Mr. Penumbra. The store must be a front for something larger, Clay concludes, and soon he's embarked on a complex analysis of the customers' behaviour and roped his friends into helping to figure out just what's going on. But once they bring their findings to Mr. Penumbra, it turns out the secrets extend far outside the walls of the bookstore...

'The pages swell with Mr Sloan's nerdy affection and youthful enthusiasm for both tangible books and new media... [but] the ties that bind the story are friendship and vitality for life. This is a clever and whimsical tale with a big heart' The Economist

Shortlisted for the LA Times Book Award for First Fiction.

My first read in 2017 and hopefully better books lie ahead of me. The book itself was a bit of a departure from my normal type of crime fiction reading and while I was mostly engaged by the story ultimately it was all a bit flat come the conclusion.

Clay gets a job at a bookstore just to tide him over until something better comes along. The bookstore and its mysterious owner, Mr Penumbra harbour some strange secrets, customers who come and go at all hours without actually buying anything and a journal which is kept by the staff – one which plots the items each customer has borrowed(? – two months on and I can’t actually remember whether they take the books, buy the books, or just peruse them in their natural habitat.)   Our night shift clerk’s curiosity has been awakened and so breaking all the rules of employment he digs a bit deeper.

Apparently we have a mysterious society of authors and readers, who’s books have been written and accepted and then “coded” and which become part of the society’s secret library. Only one copy of the book exists, and if you piss off the society, your book gets burned. Our historic founder of our society has his own coded magnum opus, which itself houses the mystery of eternal life, or was it the secrets of the universe – I forget (and to be honest can’t be bothered to re-check the book to decide which).  The society members are striving to unlock this secret code by virtue of studying other journals held within the society’s library.

Somewhat bizarrely I quite liked the premise of this, though a month or two on it comes across as complete and utter nonsense. The author does kind of ramp up the tension as Clay and his friends – a rich entrepreneur and a super-savvy (and Clay’s love-interest) high-flying Google executive harness their resources; namely cash for a trip to the New York branch of the secret society run by Mr Penumbra’s boss - a card-carrying Luddite, and a Google super computer to apply algorithms and logarithms and loads of other nerdy isms to reveal the secret code. Inevitably when you’ve been waiting for the secrets of the universe to be revealed, the eventual reveal is a bit of a damp squib.

Interesting characters, enjoyable friendships, a great setting in an old bookshop, housing tons of mysterious books from floor to vast ceilings, a bit of a mystery-cum-fantasy tale if you like.

Enjoyable up to a point, but a bit disappointing in the end. 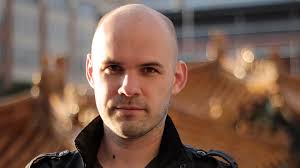 Robin Sloan has also penned a short prequel to Mr Penumbra’s 24 Hour Bookstore, entitled Ajax Penumbra: 1969. One of my yardstick's for measuring a book's enjoyment is whether I would be interested in reading more from the author in the future, in this case it's a negative.