AN UNSOLVED MURDER IN A MADHOUSE

There’s been a savage killing in an asylum for the insane.

Johnny Barrett is a journalist, and he wants to solve the case. He also wants to win a Pulitzer Prize for investigative reporting. Faking insanity, he gets himself committed – to a nightmare. Will he ever get out again, sane or insane?

This is the novel of Sam Fuller’s amazing 1963 movie Shock Corridor, a study in madness, hallucination, sexual fantasy and terror that grips from the first page to the last.

First publication in this country.

This book was one of my first crime novel purchases back in the early 90’s. I can even remember the shop I bought it from – Athena in St. Albans, now long gone from our high streets. It hasn’t sat on the TBR pile for 24 years though, as I have previously read this, but back in the read ‘em and keep ‘em days.

This time around I was hoping to read this in June for a one-off 1963 challenge, which Rich at Past Offences suggested. Well I got there eventually, either a week or a month late depending on your viewpoint.

On my first read, I don’t think I was aware that it was a novelisation of a movie, which (and in spite of the fact that I have a few on the shelves) is something I’m not a great fan of. It kind of smacks to me of copying someone else’s homework. That said I did enjoy it, though always had at the back of my mind how things turned out; which as it’s been 20 years plus since I read the thing must mean the author did something right, bearing in mind I sometimes finish a book nowadays and can’t remember whether I’ve read it six months down the road.

We have our young ambitious journalist, Johnny Barrett faking insanity with the blessing of his editor and against the wishes of his knockout stripper girlfriend, Cathy. Barrett pretends Cathy is his sister, who files a complaint against him – alleging he keeps trying to have sex with her. After a brief investigation and an evaluation of Barrett’s mental health he is committed.

Having successfully completed the initial part of his plan, Barrett has access to the same ward and staff and witnesses as those involved in the unsolved murder case which he is trying to crack. Johnny encounters a variety of patients with a range of delusions and mental illnesses. He puts himself close to the witnesses, hoping to seize on a moment of mental clarity to unmask the murderer; all the while trying to maintain the façade of his own sickness.

After involvement in a violent incident with a young, Ku Klux Klan supporting, delusional black man, Barrett encounters life in the hole, as well as later being subjected to electric shock treatment. Cathy, his sister-girlfriend on her visits becomes increasingly concerned about Johnny’s ability to maintain a grip on his own mental faculties and fears he is starting to believe the fiction that brought him to the asylum……… when in Rome!

Barrett eventually unmasks the killer, but at what price?

I enjoyed this probably slightly less than first time around and reading slump or not, if I was totally engaged it wouldn’t have taken me over 3 weeks to devour all 160-odd pages. I was reminded of One Flew Over the Cuckoo’s Nest – the film, having never read Ken Kesey’s 1962 book. Decent storyline, interesting enough main characters, most of the support cast and their stories were a bit thin, but I’ve read far worse books. I’m probably not going to rush towards any of Avallone’s hundreds of other books, a lot of which have been published pseudonymously.

I am looking forward to reading Bill Pronzini’s Gun in Cheek and Son of Gun in Cheek where he affectionately pokes fun at some of the best of the worst in mystery fiction. I believe Avallone features in one of the editions.

I will keep an eye out for the film should it pop up on my small screen at some point, but I won't be actively tracking it down. 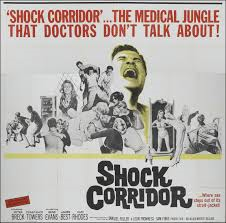