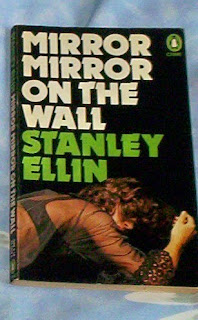 "When divorced businessman Peter Hibben gets home to his Greenwich Village apartment, he's stunned to find a body in the bathroom with his gun lying next to it. Only his teenage son Nick and the cleaning lady Ofelia had keys to the place. How could this have happened? Soon, his lawyer Irwin Gold and shrink Dr. Ernst show up to question Peter as he tries to remember the past 24 hours. Indeed, he thinks back through his failed marriage, the call girls in London and Copenhagen, to Vivien Papazor, the young redheaded chippie his father ran off with. Vivien humiliated teenaged Peter when he confronted her, and may have influenced his later predilection for putting on women's clothing. But there are even greater shocks in store in this tricky 1972 novel."

Ellin was a highly regarded US mystery writer who died in the mid-80’s. Winner of several Edgar Awards, he won the Le Grand Prix du Meilleur Roman Policier Etranger award (presumably in France) for this effort originally published in 1972.

This was a bit of a strange one to be honest, though all became clear at the end with a twist I hadn’t seen coming. Mirror, Mirror at about 130 pages long was a short, quick read and I was through it in a day at the beach.

After discovering a dead body in his apartment, Hibben is ostensibly put on trial and interrogated by his lawyer and his psychiatrist – who happens to be his ex-wife’s current husband. Struggling to deal with the tragedy and fearful that his son may be responsible; we are treated to flashbacks from his life in an effort to discover how we ended up where we are today.

Parental fooling around, sexual encounters and hang-ups, marital disharmony, work-place pressures, efforts to maintain a loving relationship with his son in the aftermath of the break-up of his marriage all feature before Ellin spins the novel on its head at the conclusion.

I have more from this author to read in the future, courtesy of a bargain find at a local car-boot sale about a month ago. This and Stronghold and The Blessington Method  all for a bargain £1.