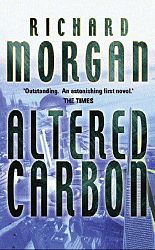 
In the 26th century mankind has spread through the galaxy, taking its religions and racial divisions out into the cold arena of space. While tensions exist and small dirty wars flare up every now and then, the UN Protectorate maintains an iron grasp on the new worlds, aided by its very own elite shock-troops; the Envoy Corps.


Meanwhile, what religion cannot guarantee technology has already delivered; when your consciousness can be stored in a cortical stack and routinely downloaded into a new body even death has become little more than an inconvenience. As long as you can afford a new body…


Ex-UN Envoy Takeshi Kovacs has been killed before; it was a hazard of the job, but his last death was particularly brutal. Needlecast across light years of space, re-sleeved into a body in San Francisco on Old Earth and throw into the centre of a conspiracy that is vicious even by the standards of a society that has forgotten how to value life, he soon realises that the shell that blew a hole in his chest on Harlan’s World was only the beginning of his problems…


Well it’s fairly obvious now why I don’t read much Science Fiction......I don’t enjoy it! I signed up to a pulp-fiction group on Goodreads site, and Altered Carbon was the February reading choice as voted for by some of the members.


Hopes were raised on reading some of the praise on the back.......hardcore, hard-boiled, astonishing, blown away, adrenaline, slick hard-hitting, brilliant, commanding, exciting, addictive, intriguing and inventive,


My main gripe would have to be that I just couldn’t feel a connection or any empathy for Kovacs. Gosh he’s in peril, will he survive this latest conflict? Yawn, who cares?


There were some decent bits in the book and to give Morgan his due he can write some decent action scenes and he has a vivid imagination, and he didn’t bore me with too much technical jargon where I felt a degree in physics would have been helpful. I’m fairly certain that many, many people really enjoyed this, but sadly I wasn’t one of them. I wouldn’t say I actively loathed it, but it was a close run thing.


I acquired my copy as a book-swap on the readitswapit website.