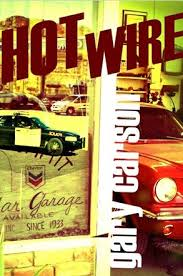 Blurb.......
Emma Martin isn't your average teenager. A scrawny, impulsive runt of a girl with glasses and a ponytail, she steals cars for the Deacon-Gonzalez Organization, an uneasy alliance of Bay Area rednecks and Mexican drug dealers who smuggle heroin and hot cars through the Port of Oakland.

Night after night, Emma cruises the streets with her hillbilly boyfriend, Arnold Willis, bypassing alarms, smashing windshields and hotwiring ignitions. But the good life comes to an end when she can’t resist a black Lexus sedan and decides to go into business for herself.

Now she's on the run from the cops, a Customs task force, two thugs who claim to be FBI agents, a spooky fed who wants to use her as bait and a gang of vicious locos who work for her own employers. A pawn in a game she doesn't understand, her only ally is a seedy reporter who thinks the car she stole holds the key to an explosive conspiracy that dates back to the fall of the Soviet Union.


I started this last year and put it aside as I wasn’t really getting into it at the time.


This time around – déjà-vous I’m afraid. I started again from scratch and whilst it opened brightly I just sort of stumbled through it, picking things up, putting them down again for a week or so, until with a steely resolve I sat down to finish it this morning.


Verdict – well okay in an average sort of way. Lots of guns, cops and government agents – bent and straight, Mexican hoods smuggling dope and hot vehicles, a burnt-out alky journalist, a dead stripper and a young pair of unlucky car thieves. Plenty of violence and death and Emma, one of the young car thieves who jacks the wrong vehicle is at the centre of the maelstrom not knowing who she can trust.


What initially seems to be a straightforward crime story evolves into a commentary on the dark forces of government that want to erode all civil liberties and take control of society. Oliver North types with added zeal ready to wage war on the streets of America turning ordinary fears into paranoia and eventually presiding over a Soviet style police state.


I would have probably enjoyed it more if the author stuck to a tale of low-level car crime and smuggling with Emma trying to extricate herself from the fix she found herself in. I just didn’t feel that emotionally invested in the overall outcome and whether she survived to tell the tale.


Slightly disappointing - as I had set my hopes a bit higher. Enjoyable but average.


The author has written another book – Phase Four, which I also have and which I’ll get to at some point.


This copy was obtained from the publisher, Blasted Heath, though I can’t recall whether I paid for it or if it was a freebie
Posted by col2910 at 00:51