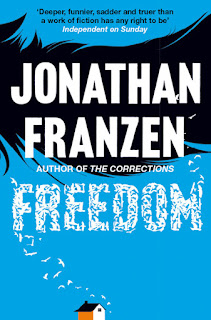 
An international bestseller and the novel of the year, ‘Freedom’ is an epic of contemporary love and marriage.


This is the story of the Berglunds, their son Joey, their daughter Jessica and their friend Richard Katz. It is about how we use and abuse our freedom; about the beginning and ending of love; teenage lust; the unexpectedness of adult life; why we compete with our friends; how we betray those closest to us; and why things almost never work out as they ‘should’. It is a story about the human heart, and what it leads us to do to ourselves and each other.


I have avoided reading this book for a year or so, somewhat put off by the size of the volume, some 600-odd pages in length........not as long as some books on the TBR pile........ Robert Littell’s The Company awaits further down the line at 900’ish! I just prefer reading shorter, sharper books.


The book follows Patty and Walter Berglund, though mainly Patty through high school and college into middle age, traversing friendships, romance, marriage and parenthood and the inter-action of the older Berglunds with their neighbours, children, best (or worst) friend Richard and extended families. Franzen dissects and documents the mundane and everyday occurrences as well as those out of the ordinary. The devil is in the detail and Franzen skilfully and sometimes humorously examines the hurts and pain each one of them feels and imparts on to the others.


Franzen could be commentating on anyone of us, or all of us. There’s nothing particularly special or worthy about the Berglunds, that sets them apart from the rest of us trying to negotiate a way through life. I suppose that  was a big part of the novel’s enjoyment for me.


To be perfectly honest though, I didn’t really warm to Patty Berglund and as a result didn’t connect with her pain, her traumas and her life issues, though I didn’t find myself despising her at any point either.


Best bit of the book, Walter and his speech-giving, a proper laugh out loud comedy moment for me.


I haven’t read Franzen before, but being the greedy, avaricious accumulator that I am, I have The Corrections and The Twenty-Seventh City on pile TBR. I’ll read them some time in the next 20-years, but won’t be rushing to acquire his next tome.


In my opinion, John Irving does it better, probably with a touch more of the absurd but he’s made me care more for his characters particularly in “Garp” and “Owen Meany.”


Some commentators have described this as the “novel of the year,”  NO WAY!


My copy was acquired second-hand from one of the local charity shops in sunny Leighton Buzzard – a bargain at 50p!
Posted by col2910 at 06:01