PHIL HOGAN - A PLEASURE AND A CALLING 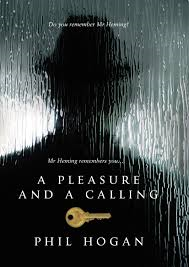 "One to watch: An eerie page-turner." -- Cathy Rentzenbrink Bookseller

"In terms of subject or style. Phil Hogan resembles John Updike or Richard Yates, figures from that classical seam of American fiction so rich in detail, domesticity, and murderous compromise." Sunday Herald

Book Description
In the excitement of moving into your new home did you think to change the locks? Are you sure no-one else is making use of your key? Compelling, unsettling and macabre social satire.

You won't remember Mr Heming. He showed you round your comfortable home, suggested a sustainable financial package, negotiated a price with the owner and called you with the good news. The less good news is that, all these years later, he still has the key.

That's absurd, you laugh. Of all the many hundreds of houses he has sold, why would he still have the key to mine?

The answer to that is, he has the keys to them all.

William Heming's every pleasure is in his leafy community. He loves and knows every inch of it, feels nurtured by it, and would defend it - perhaps not with his life but if it came to it, with yours...

Not that I haven’t got enough books of my own, but having seen a few reviews of this recent release, I was interested enough to reserve it at my local library. Currently of the 25 scores on Amazon UK, 15 give it top marks and 10 settle for 4 stars, with no dissenting voices as yet.

Our narrator is Mr Heming, a small town estate agent with a propensity for copying and keeping client’s keys, allowing him access to come and go from their lives as he sees fit. His passion is in knowing everything about everyone….. where you work, what you eat, where you shop, what you earn, etc. He’ll rifle through your drawers, but whilst he’ll take a small memento, he won’t get his thrills from stealing your wife’s panties.

“Think of me as an invisible brother or uncle or boyfriend. I’m no trouble. I may be there when you are, or when you are gone, or more likely just before you arrive. I agree it is an idea that takes some getting used to. But do we not all have a life to make, to mould it somehow around that of others, to search for the dovetail that seems best to fit?”

Creepy, unsettling and disturbing. The more we get to know William; the flashbacks to incidents from his childhood help and the more he rationalises his behaviour, the more you realise you are in the presence of a seriously deranged individual, with enough of a cloak of respectability and invisibility to pass himself off as normal.

Incidents at school and with neighbourhood children, allow his closest relatives to glean a glimpse at the malevolence lurking within the real Heming. Adulthood and a fortuitous route into a career in estate agency, allows him opportunity to perfect his art.

Some deft interventions allow Heming to almost convince us that his role is as a benign guardian of his town – disruptions to unwanted residents of his neighbourhood and an unsubtle campaign of dirty tricks……. credit card orders for holidays and garden furniture, pipes suddenly leaking, travelling tarmac contractors arriving unexpectedly…… before you know it, the unwanted have been vanquished and Heming has restored order and balance to his community.

An incident with an un-scooped dog turd and a row with Douglas Sharp, the dog owner changes the course of Heming’s life. Soon after having honed his radar on Sharp, his attentions are drawn to Abigail, Sharp’s mistress. Heming’s new obsession sets in motion a violent change of events. Whether William Heming survives the fall-out depends on the lengths he’s prepared to go.

Always interesting with never a dull moment, I enjoyed Hogan’s book. Whilst it was impossible to like Heming, I never disliked him and could understand and empathise with some of actions which were incredibly funny on occasions. I must admit I’m with him as regards poetry is concerned… "Poetry, I admit is the locked room to which my mind cannot quite be relied upon to find the key," Hopefully that’s where our similarities end!

Phil Hogan is an author and journalist. He has previously written 3 other novels and has published a collection of his columns about family life. I don’t have any of his other books, but wouldn’t rule out reading him again in the future.