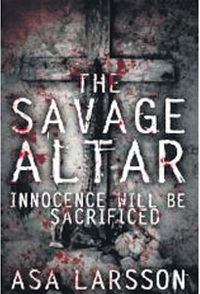 
On the floor of a church in northern Sweden, the body of a man lies mutilated and defiled - and in the night sky, the aurora borealis dances as the snow begins to fall....So begins Ãsa Larsson's spellbinding thriller, winner of Sweden's Best First Crime Novel Award and an international literary sensation.

Rebecka Martinsson is heading home to Kiruna, the town she'd left in disgrace years before. A Stockholm attorney, Rebecka has a good reason to return: her friend Sanna, whose brother has been horrifically murdered in the revivalist church his charisma helped create. Beautiful and fragile, Sanna needs someone like Rebecka to remove the shadow of guilt that is engulfing her, to forestall an ambitious prosecutor and a dogged policewoman. But to help her friend, and to find the real killer of a man she once adored and is now not sure she ever knew, Rebecka must relive the darkness she left behind in Kiruna, delve into a sordid conspiracy of deceit, and confront a killer whose motives are dark, wrenching, and impossible to guess...


Well this was my first taste of another new female author and was my chosen Scandinavian read for the current month. I enjoyed it, though the first part of the book was a bit of a slog. If I’m truthful, I think this is more down to me rather than the author, particularly as the last 160-odd pages only took me a day to cover, as I became more absorbed in the story.


On a personal level, my reading mojo appears to have deserted me this month. I‘m less driven to read at the minute and more easily distracted, tiredness seems to have over-taken me and whilst I will try and keep at it and read more this month, at the minute is seems to be less of a pleasure and more of a chore. I’m not beating myself up over it and I think I will give myself this month off from all my series reads and choose a bit more randomly for the last half of the month, with the hope of recapturing the elusive feel good factor. I sometimes think that by structuring my reading so rigidly eg next Block, next Crais, next Collins, next Scandinavian, I’ve limited my options and removed too much spontaneity from my selections.


Anyway, back to Larsson’s book........I was interested in and liked the main character Rebecka, whose admirable loyalty towards Sanna was abused and taken advantage of. Intelligent and tenacious, she was brave enough to confront her past and face her demons in an effort to uncover the motive for Viktor’s death; believing her friend innocent of the crime.


Larsson’s other characters were engaging and believable; especially Rebecka’s friend Sivving and the two police officers involved in the case. There was the token officious jobs-worth in the form of the prosecutor, but on the whole the characters were convincing.


Overall, I found it fast-paced and enjoyable with a satisfying conclusion. I’m in two minds whether I will be back for further Martinsson books, mainly because I need to read some of the many already waiting for me. The others are:


It might be worth noting that this has been published elsewhere under the title Sun Storm.


I’m unsure where or when I acquired my copy.